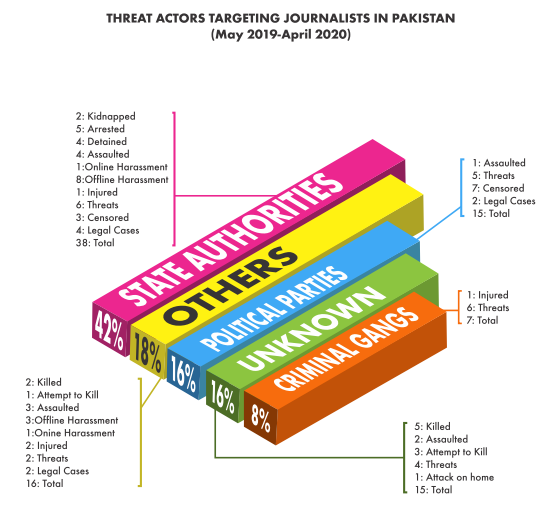 Freedom Network in its annual research, reported that at least 91 cases of violence were recorded against journalists in Pakistan over the past year, including murder, assault, censorship, threats and legal suits, signifying a worryingly escalating climate of intimidation and harassment in the country.

The Pakistan Press Freedom Report 2019-20, says that between May 2019 and April 2020, an average of over seven cases of violations occurred in a month, in the report named “Murders, Harassment and Assault: The Tough Wages of Journalism in Pakistan”.

“The screws on media in Pakistan are being tightened through various means of censorship, including murders, threats, and harassment, resulting in increasing silence and resulting in erosion of public-interest journalism,” said Iqbal Khattak, the executive director of Freedom Network. The top three categories of violations against journalists in Pakistan in the period under review included 23 cases of verbal or written threats of murder or other dire consequences (25 per cent), at least 13 cases of offline and online harassment (14pc), and 11 cases of assassination attempts (12pc), of which seven resulted in the killing of journalists.

According to the findings, while “no place in the four Pakistani provinces or Islamabad [as well as GB and AJK] is safe” for journalists, the federal capital was the “riskiest” territory with 34pc of the cases.

Sindh was the “second worst” with 27pc of incidents of violence, followed by Punjab where 22pc of the cases were recorded.

In Khyber Pakhtunkhwa, 14pc cases of violence against journalists were recorded, while 3pc were recorded from Balochistan.

The report says that journalists who worked for television were the most vulnerable, as they were identified as a target in 69pc of the cases.

Print media was the second most vulnerable sector as 28pc of the cases of violence were recorded against paper journalists.

Freedom Network recorded three cases of violence against online journalists while no such incident was reported for radio journalists.