Holi celebrations kick started on Wednesday with full zest and zeal in Pakistan, India and around the world.

Despite criticism from the religious right, many Muslims celebrated Holi with Hindus. In Thar, Muslims joined Hindu brothers in their celebrations and exchanged colour and sweets.

This practice dates back to the Mughal Era, and maybe beyond.

According to Scroll.In, Mughal Emperor Jalaluddin Akbar encouraged inclusiveness and tolerance. During his reign, all festivals were celebrated with equal exuberance and the practice was continued by his successors, excluding the more orthodox Aurangzeb Alamgir. At Qila-e-Moalla or the Red Fort, Holi was celebrated with the same exuberance and excitement as Eid. It was called Eid-e-Gulaabi or Aab-e-Pashi (Shower of Colourful Flowers), with everyone joining in.

It is said that during Holi celebrations, even the poorest among the community would throw colour at the Emperor, and artists would mimic him but nobody would take offence. In fact, the Emperor would enjoy the entertainment at offer.

Groups of traveling musicians and artists would gather under the Red Fort and display their tricks and talents, while nautch girls would dance. The Emperor would reward these artists handsomely as the noble women would watch the events from the balcony. 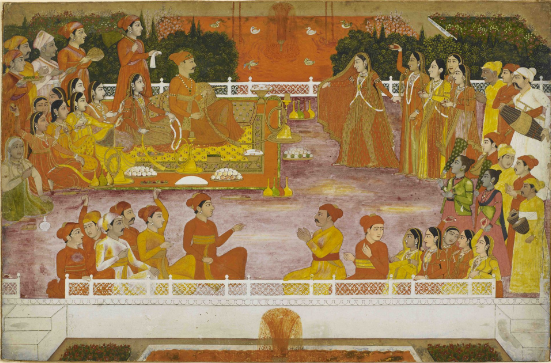 Moreover, children would also go around entertainment the elderly with their acts, while in the evening, Mahfils (soirees) would be organized in the Walled City.

Unfortunately, after the partition of the sub-continent and emergence of many right-wing groups among the two religious groups, examples of Hindus and Muslims celebrating Holi or Eid together have become numbered.

But hopefully, people from both communities would learn from the past and re-enter the era of co-existence.