Is China Rising For The First Time As A Global Superpower?

In this highly competitive world, only those survive and progress who muster strength and have both courage and the will to use it when so required – whether it be an individual, a family, a group, a nation or a country, writes Aslam Shad.

Many people speak about China rising for the first time, but this, perhaps, is not a very correct statement.

Just look at what China was in the first half of the 15th century and what the fate and shape of the world might have been, if the Ming Empire had followed the trajectory of maritime expansion in the Indian Ocean and not abruptly reversed this policy by confining itself within the fold of its huge landmass.

At the dawn of the 15th century, China was the nearest thing to a global superpower the world had known: bigger and richer than all its possible competitors combined. China had perhaps one hundred million people, whereas the whole of Europe mustered only half of that number. China’s giant economy dwarfed that of every other state in the world. The empire’s huge surplus of wealth distorted the economics of all the lands that looked to China to generate trade, from Europe, across Asia and the Indian Ocean , to Japan. China produced so much of everything that there was little demand for imported goods except spices, aromatics, silver and warhorses.

Even when Europeans could get to China, or to the other fabulously opulent markets around the Indian Ocean and on the shores of maritime Asia, they had nothing to sell. The remote, peripheral corner of Eurasia was too poor. European merchants bound for China had to take silver with them – at the risk of impoverishing Europe further by draining bullion eastward, because the Chinese would accept nothing else.

China’s maritime push to the Indian Ocean – “the seas of milk and butter” as ancient Indian legends called those seas – commenced in the very beginning of the 15th century when seven missions under the command of a Chinese Muslim admiral Zheng He visited at least 32 countries around the rim of the Ocean from 1405 to 1433 AD.

The first three voyages, between 1405 and 1411 AD, went only as far as the Malabar coast (Western Ghats of India), the principal source of the world’s pepper supply, with excursions along the coasts of Siam, Malaya, Sumatra and Singapore. On the fourth voyage, from 1413 to 1415 AD, he visited the Maldives, Oman and Jeddah. On the fifth voyage, the admiral collected beasts for the Imperial Court such as lions, leopards, camels, ostriches, zebras and giraffes etc. In 1421 AD, a sixth voyage departed visiting Mogadishu, Mombasa, Malindi, Zanzibar and Kilwa off the eastern coast of Africa. In his seventh voyage, from 1431 to 1433 AD, Admiral Zheng renewed contacts with the Arabian and African states which he had already visited. 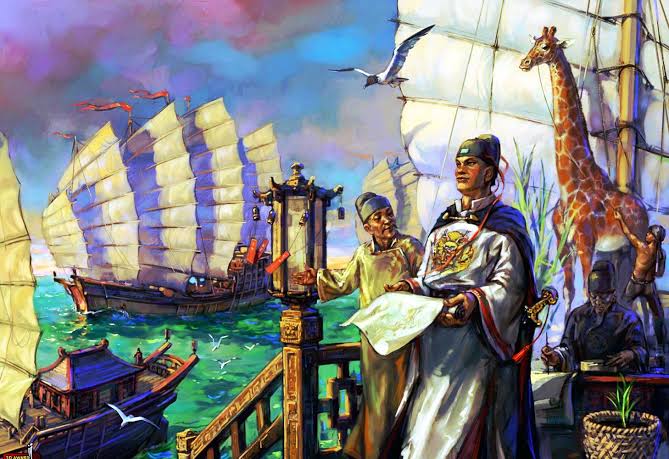 It was a major effort by China to found a seaborne empire, reaching across the Indian Ocean, to exert political power around the shores of the Indian Ocean. During these expeditions, the Admiral replaced unacceptable rulers in Java, Sumatra and Sri Lanka and founded a puppet state on the commercially important strait of Malacca and gathered tribute from Bengal. The admiral’s ships were much bigger than anything European navies could float at that time. The first expedition is said to comprise 62 junks of the largest dimensions ever built, 225 support vesselsand 27,780 men. The seventh voyage, probably the largest, sailed 12,618 miles. The voyages did display China’s potential as the launching bay of a seaborne empire, the capacity and productivity of her shipyards, ability to mount expeditions of crushing strength and dispatch them over vast distances. Zheng He’s encounters with opponents unequivocally demonstrated Chinese superiority.

At the Court of the Chinese Emperor, there were two groups which fiercely contended for power.

The first were scholars, gentlemen and bureaucrats who never concealed their disdain and indifference toward seaborne expansion and their contempt for trade. Their thrust was to safeguard northern frontiers from the Mongol excursions, improve governance and do the maximum for improving the lot of the common people in China in line with the Confucian philosophy.

The other group in court consisted of the Buddhists, the Muslims, the eunuchs and the fast upcoming merchant class, which thought that the survival and glory of China lay not in isolation but in maritime expansion and trade.

In the 1430s, the balance of power at the Court decisively swung in favor of the scholars and bureaucrats who reversed the policy of maritime expansion by imposing a complete ban on the building of any naval ships or otherwise, incurring any expenditure relating to any seaborne activity. This obviously put an end to all that had by then been achieved by the brilliant Admiral Zheng He, still a legendary figure of Chinese naval history.

It may, however, be noted that Chinese disengagement from the wider world was not the result of any deficiency of technology or curiosity.

It would have been perfectly possible for Chinese ships to visit Europe or the Americas, had they so wished. But there was no point in pursuing such initiatives: they led to regions that produced nothing that the Chinese wanted. It would have been folly to pursue voyages across the Pacific Ocean as well, because the Chinese thought that no people lived there with whom they could possibly wish to do business. As a result, in the 1490s the Indian Ocean was on the brink of a new future in which Europeans would cash in on their disadvantages. For that future to happen, Europeans needed to penetrate the oceans with ships. Since they lacked salable commodities, they had to find other ways of doing business: shipping and freighting were their best resources and so they went for this.

The policy of disengagement – rather isolation – though it sounded attractive in the 1430s, proved strategically suicidal for China over the next couple of centuries. Eventually, a small island turned world’s undisputed naval power (Great Britain) defeated a relatively isolated China in the first Anglo-Chinese War (1839-42 AD), took monopolistic control of its trade and taxes and also forcibly obtained the lease of the strategically located island of Hong Kong for a period of 99 years in 1898.

The other European powers and the USA, too, took their share of China. The humiliation did not end here. A small country like Japan which ended its self-imposed policy of isolation in 1867 underwent the process known today as the Meiji Restoration and smashed the Chinese in the war of 1894, and then again in the First World War.

In this highly competitive world, only those survive and progress who muster strength and have both courage and the will to use it when so required – whether it be an individual, a family, a group, a nation or a country. Leaving apart the philosophical overtones of the Confucian approach, the withdrawal did cause a lot of damage to the prestige, honour, strength, viability and at times the very survival of China as a proud nation.

So, the present rise of China on the world scene is, in fact, its second homecoming to the stage of global history. Let us see how the events unfold in our highly complex, reckless and unpredictable world.

Where Is The Outrage Over Rising Cases of Violence Against Women?
Balochistan’s Women Cricketers Disheartened At Govt’s Decision To Ban District Matches
Hindutva Antics Are Destroying Indian Society