Muslims in Dubai prayed and ended their fast at Dubai’s Guru Nanak Darbar Gurudwara to promote interfaith harmony and build upon the success achieved in the United Arab Emirates (UAE)’s Year of Tolerance.

While dozens of Sikhs enjoyed langar (free community meal) sitting on the floor of the community kitchen hall of the Sikh shrine, a group of Muslims ended their fast seated at tables on another side of the hall, according to a story published in Gulf News.

The Maghrib Azaan was recited in the gurdwara and prayers were lead by Bangladeshi Imam Hafeez Abdul Huq in separate prayer areas for men and women inside the Gurdwara.

The head priest of the Sikh shrine joined Muslims in prayer and shared meals. In the Year of Tolerance, the gurudwara is organising iftars at its premises throughout Ramadan.

The gurdwara has been organising iftars for the past six years for one-day during the month of Ramazan, offering delicious vegetarian food to the Muslim worshippers.

This time, gurdwara chairman Surender Singh Kandhari says, daily iftars will be organised. Although the main aim was to feed Muslim workers and labourers, those who learnt about it through friends and relatives also came to see it all by themselves. 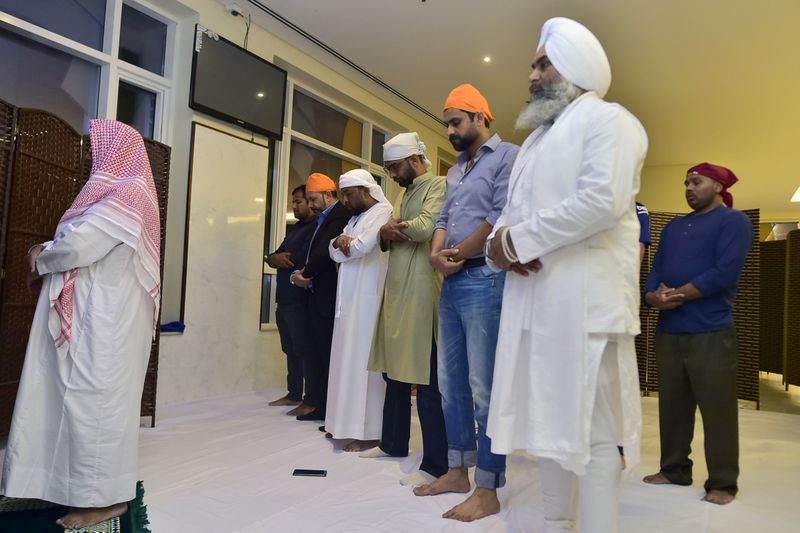 Muslims and Sikhs pray together in Gurdwara. (Photo: Gulf News)

Karachi-born Muhammad Awais, who works in Dubai as a chef, was invited to the gurdwara by his friend Kuldeep Kumar, who is a Hindu. Both Awais and Kuldeep had never gone to a place of worship other than their own respective ones before.

“Indians here are very friendly. This experience has been very touching,” Awais describes his experience. Syed Waqqas, another attendee, said this was an example that could be emulated by all places of worship to improve religious camaraderie.