Nusraf Jehan Rafi, a Bangladeshi teenager, who accused her school headmaster of sexual harassment was burned to death on April 10.

Bangladeshi police said that her killers wanted the death to look like a suicide.

Police Bureau of Investigation chief Banaj Kumar Majumder said that Nusrat was rescued after the attackers fled. She recorded her statement before she succumbed to burns.

“One of the killers was holding her head down with his hands, so kerosene wasn’t poured there and that’s why her head wasn’t burned,” the police officer said. Medical experts said that 80 percent of Nusrat’s body was burnt.

In the ambulance, fearing she might not survive, Nusrat recorded a video message saying that the ‘teacher touched him’ and that the killers were students from her school. Nusrat said that she would fight her case till her last breath. 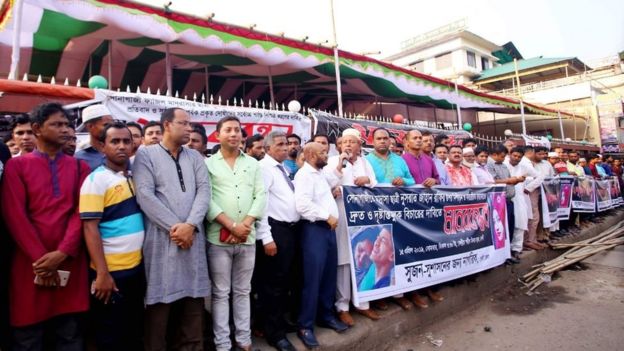 Protests over Nusrat’s murder in Dhaka.

Bangladesh Prime Minister Sheikh Hasina assured that justice would be served and none of the people involved in the heinous crime will be spared. “None of the culprits will be spared from legal action,” she said.

Nusrat’s death has sparked protests and thousands have used social media to express their anger about both her case and the treatment of sexual assault victims in Bangladesh.

“Many girls don’t protest out of fear after such incidents. Burqas, even dresses made of iron cannot stop rapists,” said social media Anowar Sheikh.

According to CNN, 54 percent women surveyed by ActionAid in Bangladesh have faced sexual harassment. In Pakistan, 854 cases of sexual harassment were reported in 2019, while over 3000 cases of child sexual abuse were recorded.