Arif Naqvi, the Pakistani founder of the largest private equity insolvency firm, Abraaj, had his bail request denied in London this week – after a judged ruled he’s a flight risk. When arrested earlier in the U.K this month for U.S. charges of defrauding investors, he wrote down Pakistan president Arif Alvi’s phone number.

Naqvi provided police with the telephone number of Pakistan’s president Arif Alvi, as one of the seven contact numbers, said Rachel, a U.S. prosecutor. “That suggests he has extremely high placed friends in Pakistan,” said Judge Emma Arbuthnot.

In her ruling she said, “I’m concerned to see he had the president’s number on him, adding, “If he were to be granted bail, I’d be extremely concerned he would leave the country…I’m not going to grant him bail.”

The extradition hearing has been rescheduled for May 2019.

During the hearing, prosecutors argued that the phone number of Alvi was one of seven numbers Naqvi scribbled out during his arrest. The prosecutor, Rachel Kapila, said “There is a strong concern he will flee to Pakistan if granted bail and he has been known to use a private jet, which may provide the means to do so.”

The U.S. does not have an extradition treaty with Pakistan, she said. If he did flee to the country, it would be “extremely difficult to get him back.” Kapila said.

Naqvi, 58, appeared at Westminster Magistrates Court for the latest in his extradition saga after his arrest in London.

Naqvi, 58, appeared at Westminster Magistrates Court for the latest in his extradition saga after his arrest in London. The prosecutor said “he is alleged to have played the leading role in a multi-million-dollar scheme to defraud investors,” she said, and if extradited and convicted, he faces a maximum sentence of 45 years.

The Rise of the Power House, Abraaj

The Abraaj group took over 16 years to grow into a global titan — but just four months to fall.  Once revered as one of the most influential emerging-market investors, it gained credibility as the Middle East’s largest private equity dealer maker.

The founder Naqvi, was born in Karachi, Pakistan; thus it was this patriotism that saw him and his family establish the Aman Foundation, the largest private social sector enterprise in Pakistan, which supports sustainable development in healthcare, nutrition and education.

A graduate from the London School of Economics, viewed as phenomenal by business experts “a decade-plus ahead” of others in understanding investment potential in developing markets, said Harvard Business School professor Josh Lerner, in an interview with Forbes magazine in 2015.

His trajectory is compelling, in a 2014, Yale School of Management, interview Naqvi said he fell into the private equity industry, merely “by accident” after he quit his job at a prestigious Saudi firm. 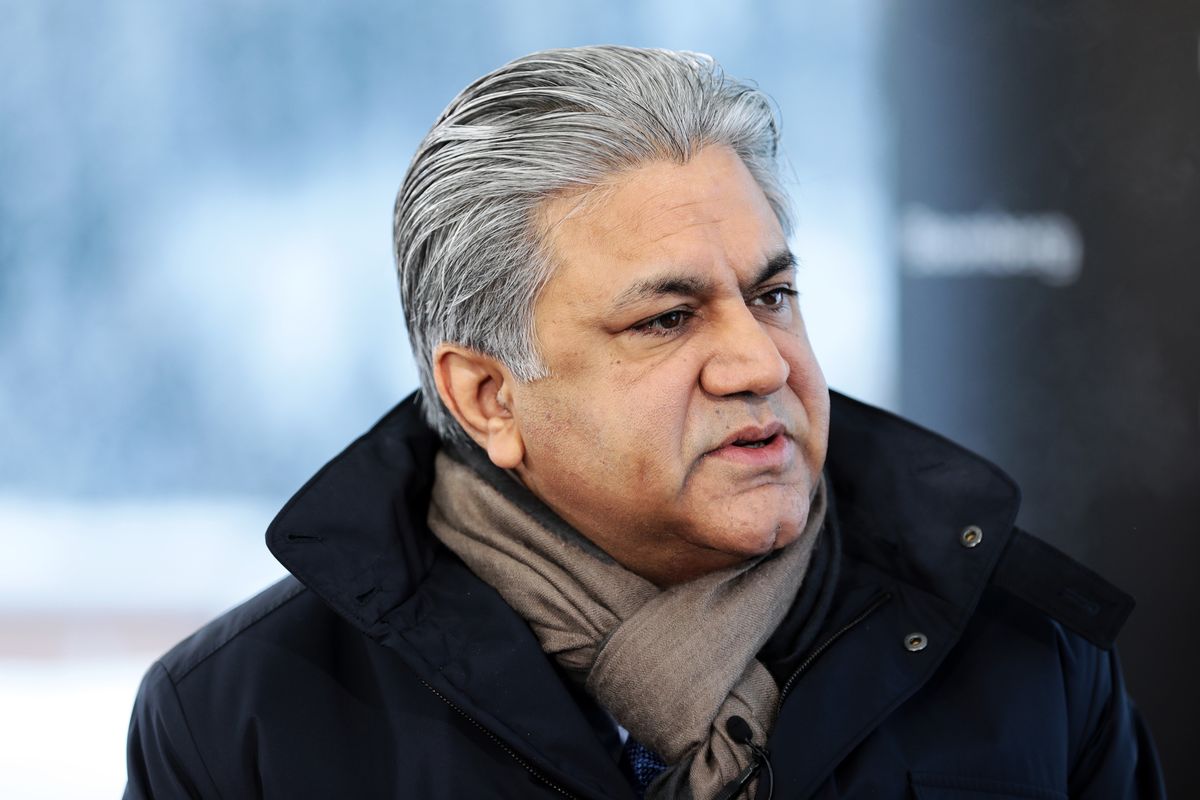 Naqvi recalled “I just went to my boss and said, ‘I want to leave.’ And his boss responded, ‘I think you’re being a bit presumptuous. You’re very young. You can have any job in this group that you want. Which one would you like?’  Naqvi said, ‘Well chief, you can’t offer me what I really want… I want your job,’

Determined, he used his $50,000 savings to set up Cupola, a Dubai investment firm, before purchasing Inchcape Middle East in 1999, another business-services company – he sold it for $173m, and founded Abraaj in 2002.

From there on, Abraaj’s star power rose. In Dubai, Abraaj quickly grew into the Middle East’s largest private equity fund, and the world’s most influential emerging market investors. With investments in lending, real estate, health care and clean energy spanning Africa, Asia, Turkey and Latin America. – Abraaj appeared to have a stake in everything. At its peak, it managed $14 billion in assets with over 300 local staff working in 25 countries from the Middle East to Africa.

The company collapsed last year when it was reported that the firm’s primary revenues had been unable to cover operating costs for years and that it had concealed this information from investors.

To maintain the charade, according to former employees, Naqvi did everything he could to portray Abraaj as a success. He offered generous staff budgets for travel and entertainment and even leased a corporate jet; he coveted new clients with lavish business conferences that featured extravagant gala dinners at Dubai’s luxury Armani hotel.

But behind the veneer of extravagance, Abraaj’s foundation was shaky. The fees earned from managing investments between 2014-2017 barely covered operational costs. According to liquidators, Price Waterhouse Coopers (PWC); Abraaj had been diverting funds from his investors’ accounts to cover this deficit. This is when the Abraaj cracks appeared.

Although common for private equity firms to thrive by borrowing money to fund acquisitions, they don’t typically use debt to pay for basic expenses, according to Ludovic Phalippou, associate professor of finance at Oxford University’s Said Business School.

The Fall of Abraaj

Naqvi’s house of cards started to crumble in September 2017, when investors – including the Bill and Melinda Gates Foundation –who had raised $1billion health care fund in 2016 – asked questions about how their money was spent.

In the course of monitoring their investments, the investors suspicions arose that not all the funds were spent. They demanded to know why the funds were not returned – as a clause in the fund stipulated that any unspent money would be returned. In Nov 2017, four of them accused Abraaj of withdrawing funds without consent. They appointed forensic accountants to investigate and although the funds were later returned –the damage had been done.

Once the deceit was exposed other lenders turned off their supply chain of finance and the firm collapsed.

Naqvi eventually relinquished control of Abraaj in June 2018. But it was revealed that for years Abraaj’s primary revenues didn’t cover their basic operational that Abraaj had been borrowing money to cover, and now owes creditors over $1 billion

Abraaj’s “highly unstable” business model was criticised in a liquidator’s report. According to investigators at PricewaterhouseCoopers (PWC), who were analysing the reports, some of the documents went missing. The investigator added the use of loans to cover operating expenses left it “sensitive to volatility and potential liquidity crisis.” They also allege “mismanagement, comingling of fund and misappropriation of assets”.  Abraaj owes credits over $1billion – PWC is now selling Abraaj assets to pay creditors.

Assets for sale include 12 funds and holdings in a Pakistani utility and discount voucher business that include: Wanda $9m, Entertainer $22m, Spinney’s $56m, with the largest holdings in Pakistan — K electric $331 m and LP stakes in funds $646m.

Naqvi has declined to comment but an email statement from his firm defended the use of leverage as borrowing as a necessity – it said most of Abraaj’s early clients were family businesses that were not always timely in making payments. The statement continued “In hindsight the pace of growth should have been measured,” and “the back office was not keeping pace in terms of sophistication and best practice.” Back-office operations usually oversee record maintenance and accounting.

Dubai’s star financier now awaits his extradition inside a 10ft by 6ft cell in HM Prison Wandsworth, U.K, a world away from his life a year ago – when mingling with global business leaders in Davos, rubbing shoulders with high profile celebrities including the Clintons and Richard Branson – sailing on private yachts and residing in luxury sprawling mansions across London and Dubai.

The collapse is one of the highest profile cases of alleged fraud by a private-equity firm in history. It exposes flaws as to how such firms self-calculate the value of their investments, and what accountability they have to regulators and investors – who seek exposure to emerging markets.

According to a U.S. indictment that forms the basis of his arrest and U.S. extradition, Naqvi is accused of secretly diverting $230 million in hundreds of millions of investors funds for personal gain and to help prop-up Abraaj’s declining finances in Dubai, before it filed for provisional liquidation in June 2018.

U.S. prosecutors in the Southern District of New York, also accused Naqvi and other top Abraaj executives of fraudulently inflating the value of Abraaj’s investments by over $500 million to deceptively improve Abraaj’s performance record. The inflation allowed them to raise more money from investors for new funds and overcharge for the fee income collected from investors.

Prosecutors said. “By fraudulently claiming that Abraaj funds were more successful than they were, these inflated valuations deprived investors of accurate information on which to base their investment decisions and enabled Abraaj to collect higher investor fees than it was actually entitled to receive,”

A high profile figure, Naqvi maintained a visible public profile regularly speaking at conferences including the World Economic Forum in Davos, and is quoted in international news articles and on television. Prosecutors allege he sought to commit fraud “by means of wire, radio and television communication in interstate and foreign commerce, writings, signs, signals, pictures and sounds.”

“Mr. Naqvi maintains his innocence, and he fully expects to be cleared of any charges,” Naqvi’s spokesperson said. “He has been working tirelessly to maximise returns for Abraaj’s creditors.”

But the Abraaj criminal net continues to expand. According to the U.S. charges, Naqvi is not the only executive arrested connected to the fraud. Abraaj’s former managing Mustafa Abdel – Wadood, was also arrested in New York while in the U.S. touring Ivy league colleges for his son.

Wadood, the financier and co-founder of the Young Arab Leaders non-profit organisation, joined Abraaj in 2006, after successful spells with the Orascom Construction, Sigma Capital and EFG Hermes. He resigned from Abraaj last year to establish his own London-based private equity operation.

The criminal case against the former executives again expanded to a third arrest in London this week when Sev Vettivetpelli, a former Abraaj managing partner, a British citizen was arrested. His extradition hearing to the U.S. and is due. Vettivetpelli left Abraaj last year to join LGT Group, a financial services company owned by the royal family of Liechtenstien. Vettivetpelli couldn’t be reached for comment.

Vettivetpillai is under suspicion “to inflate valuation of positions held by Abraaj funds in order to obtain greater investment from U.S. investors,” according to a London court filing. The former Chief financial officer, Ashish Dave and Waqar Siddique are also named as co-conspirators in the court filing.

Tags: Donate To Naya Daur
Previous Article
Shia Community In Karachi Stages Sit-In To Demand Release Of Missing Persons
Next Article
‘It’s A Matter Between Ourselves & Pakistan’: US Refuses To Share Data On F-16s With India