The State Bank of Pakistan (SBP) on Tuesday said that Pakistan’s economic growth is set to slow down to between 3.5-4.0 percent in 2019 fiscal year from 5.2 percent in 2018. Inflation also continued to increase mainly due to cost factors and some persistence in underlying demand.

“Real GDP growth during FY19 is likely to moderate significantly, mainly due to slowdown in the growth of the agriculture sector and stabilization measures taken to preserve macroeconomic stability,” the SBP said.

According to Reuters, the Pakistan Tehreek-e-Insaf (PTI) government is targeting a 6.2 percent increase in GDP, but several economists believe that the growth would slow down in the coming months.

Quick Summary of the SBP's latest report for the average citizen:
you will face higher inflation and a low prospect of finding decent-paying jobs in the near-term. The economy is contracting and there is no way out except structural reforms, which are nowhere near in sight.

He said that for skilled youth of Pakistan, finding a job will now become harder than ever because SBP does not see much potential. “SBP does not see potential for jobs in Pakistan and recommends that ‘strategic diplomatic efforts’ be made to send more skilled labor abroad.” 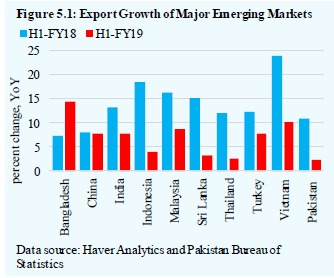 Younus added that youth/job seekers from middle classes or below will find it even harder to sustain their lifestyle in the coming months due to high inflation and stagnating economy.

Another point he highlighted was the lack of export growth. He said that despite the export package given to the export sectors, Pakistan is still unable to grow its exports at the same pace as the other countries. “This shows how uncompetitive and rent-seeking industrialists are in the country.”

He concluded that economic growth was consistently slowing and only structural reforms could counter the problems.