FIA conducted a raid in Lahore’s Kacha Lines Road on basis of information and arrested excise and taxation officer, Syed Tajjamul Hussain Naqvi, who was reportedly part of the gang which leaked CSS exam papers.

Another suspect, identified as Engineer Bilal Shehzad Sial was arrested after Naqvi’s mobile phone was examined.

The suspects leaked exam questions via WhatsApp to students in return of hundreds of thousands of rupees, the FIA said. Recently, Rs 980,000 was also sent to Mugheri’s bank account in Multan through Sajjad and raids are being conducted to arrest Mugheri.

Authour Ilhan Niaz termed the incident ‘sad’ and demanded that those involved in the practice be identified and prosecuted. “FPSC is one of the last remnants of a modern civilian bureaucracy in Pakistan. Sad to see that this year’s CSS exam has been marred by alleged leak of the papers to 1000 candidates.”

The Federal Public Service Commission is one of the last remnants of a modern civilian bureaucracy in Pakistan. sad to see that this year’s CSS exam has been marred by alleged leak of the papers to 1000 candidates. All 1000 need to identified & prosecuted:https://t.co/QT2fq17dCY

This is not the first time CSS exam papers have been leaked. In 2017, the Federal Public Service Commission (FPSC) came under fire after it was revealed that CSS exam papers were leaked on social media. 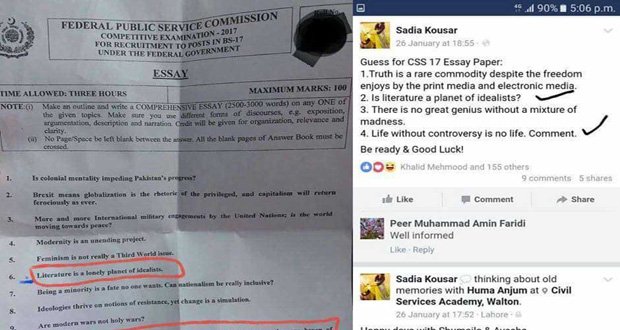 In 2017, FPSC came under fire after reports of CSS paper leak on social media surfaced.

More than 500 candidates Multan had demanded fair investigation in the matter. However, according to  Ali Hussain, who appeared in the exams, the same had happened in 2014 too when some students were given access to the question papers.

India Lockdown: Between The Devil And The Deep Sea

How Coronavirus Is Affecting The Already Isolated Transgender Community