‘We have a policy of multi-culturalism’: Susanne Olsson on Islam and Muslims in Sweden

Susanne Olsson is a senior lecturer, research fellow, and Head of Department of the Study of Religions at the Sodertorn University, Stockholm, Sweden.

A historian of religions with a special focus on Islamic studies, Olsson took her doctorate on this subject from Uppsala University, Sweden. Titled ‘Heritage and Renewal: The Quest for Authenticity in Hasan Hanafi’s Islamic Ideology (2004)’, her dissertation bears relevance to the present day discussion on religion and society.

Understandably, her areas of interest include contemporary interpretations of Islam and its relationship to Muslim traditions and modernity in the Western world. She is also interested in questions concerning theories and methods of religious studies and theology. Olsson is working on a research project, “A transforming Islamic landscape”, which looks at a new type of Muslim preacher who reaches out to global Muslim public.

She is also doing research on, “Negotiating Knowledge: European Muslims between Competing World-Views”, which discusses the development of Muslim ideologies in Europe, including Islamic creationism, fundamentalism, and Euro-Islam. Olsson has widely travelled and participated in a number of national and international conferences.

She was one of the international women participant at the International Conference on ‘Sufism and Peace’ organized by Pakistan Academy of Letters in Islamabad in March 2010.

Please tell us about your background and education

I have mainly done research on ‘piety movements’ in Islam. I have been working lately on a poet, Egyptian scholar called Umair Khalid and his televised shows on Islam. I wrote my PhD thesis on the Egyptian philosopher Hassan Hanafi.

He is not a Sufi but he is an intellectual Muslim writer, writing about Islam and ideology and methods for Muslims to be a Muslim but not to lose their identity when they want to work in the global village.

What influenced you to do research on Islam?

I always found religion very interesting. People who were religious got motivation from religion to do things. When I started at the University in the beginning of the nineties that was after the Gulf War. I was very interested in (knowing) how Islam was used as a political force in political situations and in conflict situations. Even if a conflict has a cause, it does not have anything to do with religion. It can be expressed in a religious language. And I found that very interesting. I also found, as earlier I was reading Arabic poetry and a lot of poetry was influenced by religion. I also listened to recitation of the Quran, I thought it is beautiful so I tried to learn Arabic.

What made you turn to Arabic poetry?

Earlier in life, I read a Syrian poet, Niza Qabani. He wrote love poetry that I really liked and then I realized that he also wrote political poetry. Then I read Sufi poetry which I like very much. I also studied Islamic ‘Sharia’.

Have some religious or Sufi works translated into Swedish language?

We have some translations of Rumi. Normally, we have to read in English. In Sweden, some poets are trying to translate Pakistani poets. There is one of the Swedish delegates in Islamabad who says he is trying to find some poems to be translated into Swedish language. A lot of people don’t want to read poetry in English because it is complicated for them. We need it in Swedish.

Throw some light on your PhD thesis?

In a way, he was trying to develop a new way of interpreting the religious sources in Islam with the help of European philosophy. He was showing that this method was authentically Islamic. He wanted to show that there are many similarities between cultures. He was trying to make a dialogue between religions, between people of different cultures, between different political systems, ethnicities and so on. 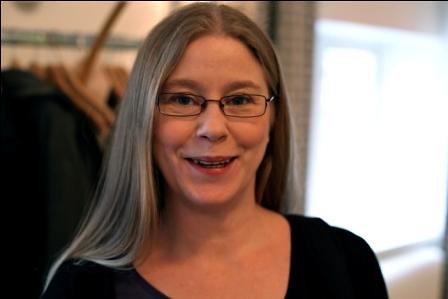 Has your thesis been published?

Yes, it has been published in Swedish language by a Swedish publishing house. It was also published in English in 2006.

What are your current research projects?

I am completing a manuscript on the teaching of M. Khalid which I mentioned earlier and this is an analysis of some discourses such as his views on gender and Western world.

Some people say Islam was used against communism in Afghanistan. What is your opinion?

Well, I think that in general if you look all over the world, religion has been used in many political cultures. That does not have to do only with Islam.

After 9/11, there is a lot of concern in the West about Muslims. What do you think of that?

I think after 9/11 people are afraid of Muslims in general. The climate in Europe and America has been difficult for Muslims. It is like each Muslim has to take this huge responsibility and defend Islam all the time. I think it is something very difficult for everyone to answer “what do you think about Osama bin Laden?”

In Europe, what we have seen in the last ten years is Islamic interpretations. They are focusing on Islam being a religion of peace and democracy and saying it is not a problem being a Muslim living in Sweden and other European countries. And that is becoming stronger every day. When governments in Europe want to work with Muslims, they try to cooperate with Muslims.

I mean this open-minded interpretation of Islam will probably become stronger in Europe as well. In Sweden, for instance, we have a democratic society. You can express your religiosity in a different way and in Sweden it is forbidden to use it in your identity cards. You are never allowed to write what religion you belong to because that is a private matter and people are allowed to keep it to themselves.

How do you compare the situation of Muslims in Sweden before and after 9/11?

I think it has become difficult. We have strong political parties to the right. They are racists and they have more members or sympathisers now. It is more difficult to live in Sweden if you have an immigrant background. It will be more difficult to get a job, many people complain about that. It has been worst in the last ten years. Lot of people think Islam is the cause of all trouble. Some people speak about the immigrants.

Do you hope that Sweden and the West would revert to a society as it existed before 9/11?

I have hope because, for example, in my country Sweden the democratic movement is very strong and we are working hard against the right wing parties. We also have what you may call multi-culturalist policy which is very open-minded. If you look at the media in Sweden, like main newspapers and T V, they are trying to show that not all Muslims are Osama Bin Laden and most Muslims are like any other Swede. Muslims are doing ordinary things in media and I think people see. So, Muslims living in Sweden are like other Swedes. We have elections in Sweden later this year. So the political debate has started about the issue of multi-culturism also because of the right wing parties. There is a strong movement against them. I hope it will benefit the Muslims. We have Muslims taking part in political discussions which is very good. I am hopeful, I have to be.

Have Muslims fortified themselves in Sweden or is there more interaction between Swedes and Muslims after 9/11?

It is both ways. Among the Muslims in Sweden we have many groups, one group calling themselves ‘peace agents’. They are Muslims working for peace and we also have some Muslim associations that are trying to spread information about Islam in society and they have lot of space, and people know about them and they are also in newspapers.

They are also in the media and they all have the policy of showing that Muslims should integrate in society, learn the language and work. But we also have some segregated groups and I think their interpretation of Islam is more conservative. But they are a very, very small minority. Many immigrants come to Sweden and they choose to live in the suburbs and then they do not get integrated and they do not learn the language and they only meet people who speak their language belong to the same ethnic group, have same religious interpretation. Politicians have to take it as a serious problem and help them.

How do you relate this with the European Union?

In the European Union, when it comes to immigration policy, it is very different between the countries.

In Sweden, we have a policy of multi-culturalism which means we accept the people looking different, believe differently and behave differently and so on. But in France they have a different opinion, like they forbid religious symbols in public places and so on. And they want people to be more alike.

So, France is a secular country in a very different way from Sweden. They can’t really be compared. The situation is very different in the European Union as well. And some countries are like Switzerland. They wanted to forbid minarets. In France they discussed if they could forbid ‘burka’. It has been discussed in Sweden. But it never became a political issue because I think it is only two hundred women in Sweden who wear the ‘Niqab’. So it is not an issue in Sweden.

What is the education policy in Sweden? Do Muslim students get their own education?

The teacher can be someone who studied Islam and can present it from Islamic point of view. In Sweden, we have nine million people only. We don’t know the population of Muslims because it is illegal but we estimate that it may be from 350,000-500,000 people, so they are not so many.

The interview was originally published in The News on Sunday

Tags: Donate To Naya Daur
Previous Article
Nawaz Sharif is unwell, will be taken to Pakistan Institute of Cardiology tomorrow: Maryam
Next Article
Between pity and heroism: Disabled or Differently-abled?