‘There is no economic crisis’: Asad Umar rejects ‘rumours’ but Pakistanis are not having any of it

Finance Minister Asad Umar on Tuesday rejected ‘rumours’ that Pakistan was going through an economic crisis. According to Radio Pakistan, Umar said “financing gap for the current fiscal year has been met”. He added that those spreading ‘rumours’ that there was an ongoing economic crisis were not doing any favour to the country.

The finance minister was speaking at the 11th South Asia Economic Summit in Islamabad where he said that “all the fundamental economic indicators are improving as a result of effective policies of the present government”. 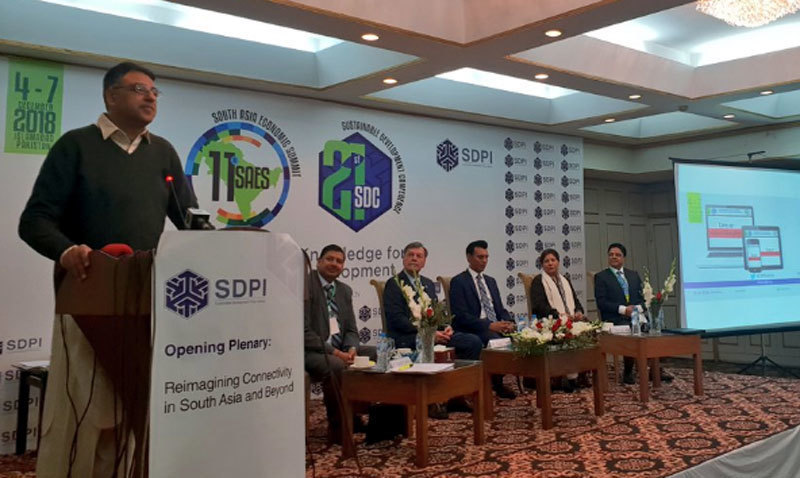 His comments come a few days after the value of Dollar soared to an all-time high. The greenback broke all records as it hit an all-time high of Rs144 during intraday trading on Friday.

It did go down to Rs140 by the evening, but the soar was unbelievably high still. According to Dawn News, the Rs10 rise in the value of the US Dollar is owning to PTI government’s commitments to the International Monetary Fund (IMF).

Curious to know how PTI performed in its first 100 days? Watch the video below

While Asad Umar believes the notion of Pakistan’s economic crisis is false, Pakistanis beg to differ

‘Is he high on something?’

Is he high on something? Rupee devaluation & price hikes are not crisises then what is? There is no economic crisis in the country: Finance Minister Asad Umar
https://t.co/EAkLKaSpNv

Then why is the business community holding press conferences, shutting units, laying off, scaling down. Exports haven't increased, only the import is reduced due to new duties, additional taxes, devaluing dollar, inflation and increase in interest rates, : https://t.co/djmNYVO4ok

"Financing gap for the current fiscal year has been met" says Finance Minister.
Why wild swings in forex & capital markets then? https://t.co/xNsNKhf067

‘Joke of the day’

Joke of the Day?
There is no economic crisis in Pakistan. Asad Umar

Umar, according to Radio Pakistan, also made it clear that no compromise will be made on the independence of State Bank of Pakistan (SBP).https://t.co/gzDvTmYjkV

Reference to “those spreading rumors” sounds eerily familiar to Ishaq Dar’s comments when the PKR depreciated during his tenure. How credible are the finance minister’s remarks when the stock market tumbles and indicators continue to worsen? https://t.co/NV4wrJ2WDz

But with expert advice, things can totally change for the good. For permanent solution to Pakistan’s economic woes, watch the video below

US Secretary Of State Urges Pakistan To 'Do More' For Stopping Misuse Of Blasphemy Laws
NAB Officer Manhandles Shahid Khaqan During Investigation: Report
World Should Look At Pakistan Through A Wider Frame, UN Secretary General

READ  Why Women Quit Education To Get Married

Tags:
Previous Article
‘We are waiting’: Fans eager as Yasir Shah closes in on fastest-to-200 milestone
Next Article
‘Thanks for the services, professor’: Twitter reacts as Muhammad Hafeez retires from Test cricket